Association of Black Cardiologists ADVOCACY Agenda – WORKING FOR YOU

The Association of Black Cardiologists (ABC) is working at local, state, and federal levels to eliminate disparities in cardiovascular disease and stroke in Blacks and other minorities with guidance from the ABC Advocacy Committee. 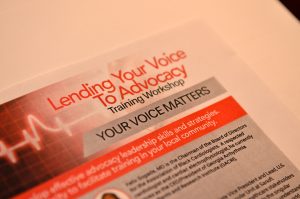 The ABC endeavors to be a leading authority for policymakers on issues that impact the practice of and access to cardiovascular care in all populations, including by advocating for initiatives and programs focused on education, prevention, and treatment.

ABC is focused on building strong, effective relationships with varied stakeholders throughout the healthcare community to help advance its advocacy agenda. Collaboration is a pillar of success.

The ABC has identified the following areas as top legislative and regulatory priorities:

Listen to a patient’s firsthand account of the impact of the Affordable Care Act and how it ensures
equal access to evidence-based treatment and appropriate medical care, avoiding financial catastrophe and adverse health outcomes:

We believe that good health is the cornerstone of progress. We are firm in our resolve to make exemplary health care accessible and affordable to all, dedicated to lowering the high rate of cardiovascular disease, including stroke, in minority populations and committed to advocacy and diversity. We are guided by ethical principles in all transactions and strive for excellence in our training and skills.